All fetch points were calculated using the Fetch Tool developed by SciTech Consulting for DFO. There are 3 steps to applying the tool: Creating the target fetch points, creating the necessary land barriers, and processing (fetch calculation, cleanup, and validation).

It is strongly recommended that all source data be Repaired initially. If a simplified barrier is desired, simplification must be done before generating fetch points to ensure all points remain on the defined seascape. Points that occur on the land polygons will not have fetch assigned.

For this work, fetch points were created along a line generated by buffering the land polygons for each region. The fetch documentation (Gregr 2014) recommends generating fetch points at some distance away from the coastline (rather than directly on the coastline) to avoid the potential loss of points to precision errors during the spatial Erase operation. An available toolbox (CreatePoints toolbox; Broad 2014) was used to generate points on the trimmed buffer line.

The following steps were applied to each target fetch points for each region:

1. Buffer the land polygon to the desired distance. The buffer should be applied to the final land barrier, otherwise some points may end up on the smoothed land.

5. Inspect the polyline and manually remove isolated lines in inlets, estuaries, etc. for which fetch would be essentially 0.

6. Apply the CreatePoints tool to the cleaned up polyline.

The Fetch processing time is strongly influenced by the number of polygons in the land barrier file, and the length of the fetch line. Regions were therefore subdivided to minimize the extents of the land file required. In particular, in regions with many fjords and inlets (e.g., NCC, QCS) inside points were separated from more exposed points which required more distant offshore landmasses.

To reduce processing time, all land barriers were simplified to the extent where no features > 5 m diameter were lost (Simplify polygon operator, bend algorithm, tolerance = 10). After simplification, M and Z geometries were disabled during application of the Dissolve operation to the land polygon to create a single, multi-part feature. Finally, because the Simplify and Merge operations can create empty features, the Repair Geometry tool was applied to the final, dissolved land polygon. This reduces the chances of low-level geospatial operators failing.

When creating the land polygons, any overlapping land files were removed as this also slows processing time. Processing time was further improved by removing inconsequential polygons from the land features. Finally, the Repair Geometry tool was applied to all final land polygons.

After preparing the target points and land barriers for a sub-region, the Fetch Tool was applied. Written in Python as a toolbox for ArcGIS 10.2.x, the tool uses low-level geometry operators to optimize performance and ensure that the run time is proportional to the number of fetch points provided for calculation (i.e., Order N). The tool can support very large runs; many of the runs for this project required several days of processing time. Intermediate results were available in case of interruptions. Please see the Fetch Tool User Manual (Gregr 2014) for more details.

Because the sub-regional land files were created to fit the fetch points as closely as possible, the fetch lines for some points inevitably ‘slipped’ through the sub-regional land files. These points were collected and processed using a final run of the Fetch Tool, using a larger, regional land polygon. The stray points were then merged back with the main group of points (the PointID field is preserved). The delivered fetch databases for the 5 regions include points and lines for each sub-region, and (except for NCC) a merged fetch feature class for the complete region. A maximum fetch distance of 200 km was used to ensure the barrier effect of Haida Gwaii was captured. 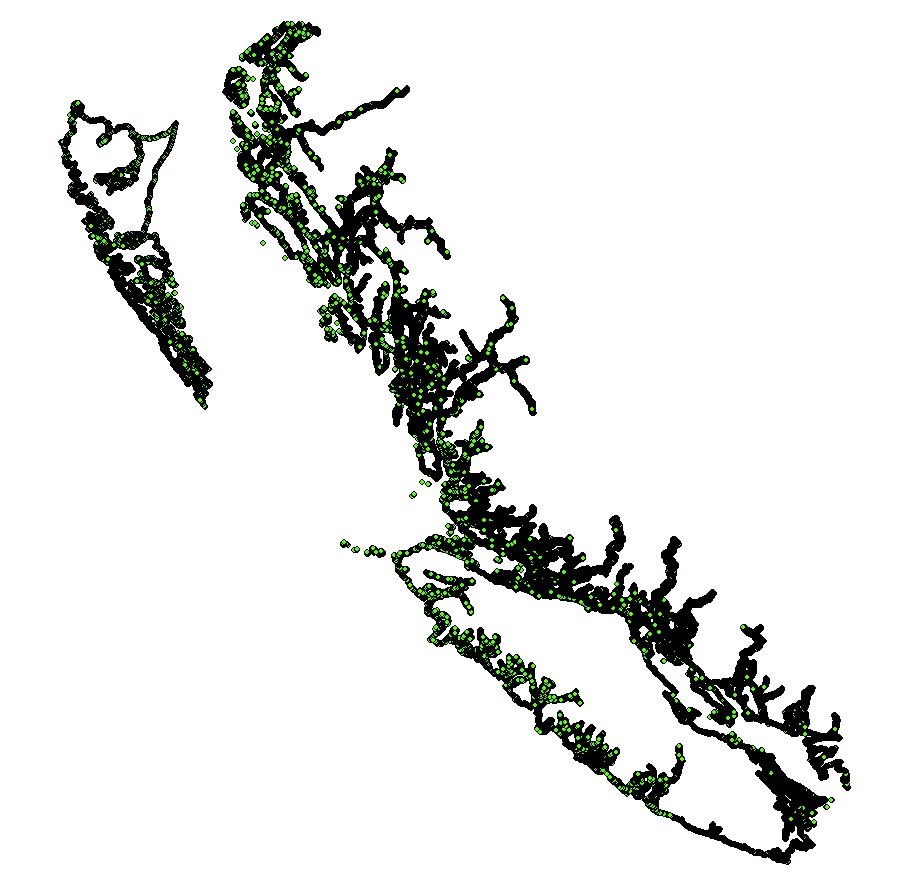